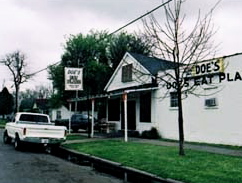 Much of my family hails from Mississippi. On a recent visit down south I led a sojourn up to the Delta for a visit to the legendary steak joint Doe’s Eat Place in Greenville Mississippi. Doe’s seems to consistently merit a spot on many a national top steak house list (from Gayot Guides to Bon Appetit). They have been lauded by the nation’s top food writers and even won a coveted James Beard Award in 2007.  In fact delta lore reports that people have come from as far as London to specifically eat at Doe’s. So it is no surprise that I have been intrigued by this small family restaurant deep in rural Mississippi and the legendary status it has attained. Lucky for me my partner Jimmy, my mom Lucie, and my surrogate sister, and fellow foodie, Amanda Puck (thefoodarazzi.com) were willing to come along for the ride.

Does Eat Place started in 1903 as a grocery store in a small house, one literally situated on the wrong side of the tracks. In 1941 Big Doe Signa retired from bootlegging and converted the small family grocery into a honky tonk where his wife Maime also sold her signature tamales. Pretty soon thereafter Doe started serving local doctors dinner between their area house calls. He cooked them steaks on a large open gas broiler. Word spread about the steaks and soon the Honky Tonk was closed and the eat place was born.

Doe and Maime have since passed away, but today their sons run the business and have franchised the concept into other Southern cities.  But the Greenville location remains as if preserved in time, featuring the same limited menu of 8 items; beef hot tamales, fried or broiled shrimp, garlic bread, chili, a house salad with their own signature dressing, and steaks grilled to order served with hand cut french fries. You enter Doe’s through the back kitchen where the giant broiler is roaring and sit in one of two dining areas – a larger room with a working service kitchen in the in the center or a smaller dining room with larger tables.

After driving for an hour across the delta from our hotel in Greenwood (the amazingly posh and chic Alluvian) we were seated in the smaller dining room. To say the place is run down would be understatement. However although it is poor in appearance, it is rich in charm. The tables are covered in mismatched vinyl cloths and the walls in Delta ephemera. Our waitress was not rich in charm – but her gritty no-nonsense attitude seemed to suit the place perfectly. 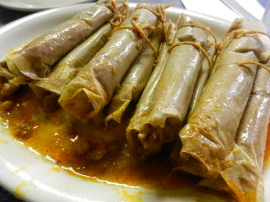 She inquired if we needed menus – a “we don’t take kindly to newcomers” battle cry that I also recently experienced at another legendary steak house, Peter Luger’s in Brooklyn (also, like Does, a James Beard Award Winner).  We did not, we had already formed our game plan in the car ride over.  We started with a few bottled beers (the only liquor on the menu – but you are also free to bring your own) and a half dozen hot tamales. These tamales were unlike any I had experienced at home in Chicago or during my childhood growing up around a lot of Mexican food in Colorado. But in this case different was delicious.  Unlike most tamles, which are wrapped in corn husks, these came in sheets of parchment paper tied with string.  They were skinny like cigars, light on corn (white meal vs. masa) but rich in a chili like beef filling. The juice from the steam pot covered the wrappers and our fingers – which everyone seemed to be licking unceremoniously. They were phenomenal. 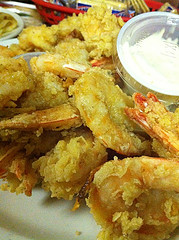 Next a basket of shrimp – each delicately fried, with a minimal amount of batter, allowing their fresh flavor to shine through. Quickly the basket was empty. Then the salads – a house specialty – chunks of iceberg lettuce tossed in ancient wooden bowls rubbed with a garlic and hand dressed with fresh lemon juice and olive oil.  I’m sad to report the salads were a disappointment.  The dressing was tasty but the lettuce had completely wilted in the hot kitchen and sogged out under the weight of the dressing.

What the salads lacked the steaks more than made up for.  We ordered both a giant Porterhouse and a Filet to share.  The Filet was delicious and perfectly cooked. But the Porterhouse was what really shined. The meat was a perfect cut, cooked to an ideal medium rare, dripping with natural juices, tender with a tasty seared crust.  Despite being half the price, it easily whipped the Porterhouse I had in January at the aforementioned New York steakhouse. Moaning definitely occurred during our dinner and I for sure had to wrestle my table-mates for a knife to cut the last remaining bits off the bone.  The french fries were equally stellar.  It is literally one cook’s responsibility to make the hand cut fries in small batches and fry them to order in individual cast iron skillets.  A labor of love that is evident in finished product. 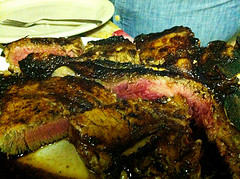 We also commandeered an order of garlic bread after seeing a plate piled high headed to another table.  It turned out to be another example of simplicity executed perfectly – crisp and garlicky outside – pillowy soft inside.

As we reluctantly pushed ourselves away from the table locals were still streaming in. And when I was paying the check our waitress popped over and opened an ancient frigadare next to the register.  It was packed with boxes of old school ice cream sandwiches and she told me to help myself.  Perhaps it was a truce or a testament to the fact that we had played by the rules; no finicky requests or pretentious behavior. Regardless, I accepted. And I swear she may have even cracked the smallest smile.

As we walked out to the parking lot eating the ice cream sandwiches wrapped in wax paper, a group of the restaurant’s African American cooks were lined up outside taking a smoke break.  “Y’all ain’t from around here are you?” one questioned. My mother, a native, protested, but I secretly wished I was, because what I really wanted to be was a regular.