“A Mexican breakfast dish which cures most ailments.” 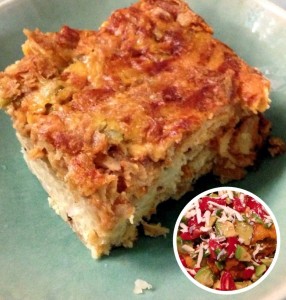 As friends and frequent readers know, I grew up around a lot of Mexican food during my childhood in Colorado. For people from the Western states Mexican food is an obsession. And mine has been further fueled by a decade plus of trips to visit my parents who now live in Santa Fe. At my house Southwestern flavors are a central part of entertaining and everyday menus. That being said I am not sure when I first started making Chilaquiles – a mexican breakfast dish centered around chilies, corn tortillas and scrambled eggs. Unlike most Southwestern food I like to cook, the recipe or idea did not come from my family or one of the Mexican restaurants where I worked during high school. Instead it came from trips to Mexico, where the dish was a culinary godsend for nights spent drinking too many Cheladas with tequila chasers. Chilaquiles are the ultimate hangover helper and breakfast comfort food. Accordingly, through the years I have made the dish at vacations rentals in Mexico and for overnight guests at The Richmond. We even served it a 1:00 am at Jimmy’s 40th Birthday Party to sober up the troops and keep the festivities going.

The central ingredients in all Chilaquiles are pieces of corn tortillas mixed with scrambled eggs. Variations add chilies, cheese, different sauces, and chorizo or pulled chicken. The dish is generally served one of two ways. The first is as scramble where all of the ingredients are loosely combined in a skillet. The other is as a casserole where ingredients are layered and baked. My recipe goes the second route. It makes it easier for large groups and I love the almost polenta like consistency which comes from the time in the oven. After many ad hoc preparations through the years, what follows is a well tested measured version which consistently hits the mark. I like to serve it with an easy pico de gillo which I combine while the dish is in the oven. That recipe is also included below.

END_OF_DOCUMENT_TOKEN_TO_BE_REPLACED

I am Lance Lawson. The home I share with my partner Jim on Richmond Street in Chicago is a reflection of what I value most. The journey to express personal style. A place to gather with family and friends. The art of entertaining well. The joy of all things aesthetic. And it is always a comforting place to return to after a long day, or a magnificent journey. All of this is The Richmond.